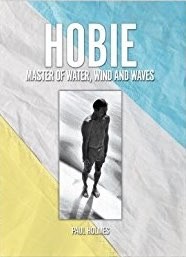 I have recently completed my latest book, Hobie: Master of Water, Wind and Waves, using your excellent program.

It is the comprehensive biography of a man who is such a rock star in the worlds of surfing and sailing that, like Sting, Madonna and Prince, he is known by his fans worldwide by just one name. This very day, Halloween 2013, Hobie turns 80 years old.

At the beginning of this year, after some 18 months of research, I knew I had to write 1,000 words a day for 100 days to complete a manuscript for my publisher, Croul Publications, in order to complete the book for a release date later this year -- in time for 2013 holiday season sales in the USA, Europe and Australasia.

It was, I am convinced, Scrivener’s genius software that made that possible.

The ability to import all of my research — 80-plus interview transcripts, a multiplicity of scanned documents, website references and more — that made the research access so simple and immediate that it saved me countless hours of searching, launching and re-launching various platforms, shuttling between multiple screens and programs, etc.

The search function was also a fantastic help as the manuscript became longer and more complex in checking for possible redundancies in the chapters. It was also a boon in building the final index. The synopsis function, that I mostly used in corkboard form, is also terrific in keeping track of chapter content as it evolved during the writing.

For a long-form author engaged in a complicated project with a vast array of background research, Scrivener is light years ahead of any other word processing tools, none of which I’ll ever use again except for one- or two-page documents.

I have not so far written movie scripts, but I have started one, albeit not very ambitious, for an 8-character, 4-minute short, and I’m using Scrivener to do it. I have drank, drunk, drunken your Kool-Aid.

Perhaps interestingly, I came across Scrivener by serendipity. My neighbor here in Laguna Beach, California, is a retired systems analyst and computer whizz; an early tech-whiz kinda guy. He told me that he’d seen on some blog somewhere that novelist Michael Chabon was raving about Scrivener after using it for his latest book, Telegraph Hill.

When I referenced that link, long lost now, about how much research Chabon had on file about Oakland history as background, I immediately thought, "Aha!" -- and I took Scrivener’s 30-day trial option. Just five days later I was already convinced and paid my $45, not quite believing how inexpensive it was.

There’s no question in my mind now that it is the best investment I ever made.