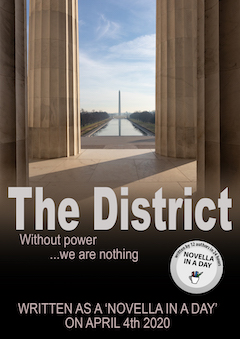 The District was written as a Special Edition of Novel in a Day (Novella in a Day) on Saturday 4th April 2020
Seven versions were produced: Purple, Blue, Green, Yellow, Orange, Red and Grey.

All of the versions were compiled using the Mac version of Scrivener. You can download the Scrivener project (which includes all the chapter briefs sent out to participants) here, along with the compile settings use to produce the books here.

Visitors, don't forget to check out the DIY mix-and-match version of this book by our fantastic gr at

When the going gets tough...

Thank you for making our lockdown much more fun what is the plan for tomorrow please:)
"The question is," said Alice, "whether you can make words mean so many different things."