Only because of your post I realised that I had the same problem. I write in German, so there are only rare occasions where I have to use accents.

This link helped me:
http://askubuntu.com/questions/360696/keyboard-not-working-100-after-ubuntu-13-10-upgrade

In my case I set Keyboard Input Method to IBUS, restarted and everything was fine, just like this: áéíóúÁÉÍÓÚ àèìòùÀÈÌÒÙ.

I am using Linux Mint but any distro should have a similar dialogue in System Settings.

Linus wrote:Only because of your post I realised that I had the same problem. I write in German, so there are only rare occasions where I have to use accents.

This link helped me:
http://askubuntu.com/questions/360696/keyboard-not-working-100-after-ubuntu-13-10-upgrade

In my case I set Keyboard Input Method to IBUS, restarted and everything was fine, just like this: áéíóúÁÉÍÓÚ àèìòùÀÈÌÒÙ.

I am using Linux Mint but any distro should have a similar dialogue in System Settings.

Thanks for your message. I tried the ibus system and still get the same behavior...
I'll try to dig a little bit more. Too bad that they dropped the Linux version...
Thanks once more,
AA

Hello Linus,
I am considering getting Scrivener. I write a lot in both German and English. Does Scrivener have its own German language setting (the way most word processors now do)?
I use Windows 7 as an operating system.
Thank you.
Sidney

Sure, under Tools>Options>Corrections you can select - or, if not yet available, first download - a German dictionary (see manual B.6 Corrections). However, you cannot have a multi-language project. So the dictionary is applied evenly to all documents in a project. Therefore also, unlike in Word, you cannot have e.g. parts of a document use one language and other parts another language. So, if you have a project with German and English texts in it, you would have to switch spelling settings back and forth to check documents or document parts in different languages.

I use Scrivener for Windows under wine (from winehq, OS=Linux Mint 18.3). I experienced the same dead-key issues mentioned above. After installing and activating (in startup applications) ibus Scrivener worked OK: é,á etc.
....
And then, after a while, only the first accented char I use in a session showed up, e.g. é when I type á afterwards. No idea how this came about.

I have the same problem with accented characters. Using Scrivener under Wine with ArchLinux. I've tried ibus, but it doesn't solve the problem.

Has anyone been able to solve it?

Currently I am able to reset what character appears by typing one with the opposite case, e.g. if it's currently ê, type a capital letter with an accent, then type the one you actually want.

I use Mint (Linux Mint 19.2 Cinnamon) and run Scrivener under Crossover. I have loaded multiple "keyboards" (System settings | Keyboards) and do not have any problems.

I usually use the Windows version under wine and don't have this issue. But I enter accented characters with the right alt key. Will that work or do you have to use compose?

My compose key is the right Alt key

. Could you expand on your setup?

I just solved this on my system, so I thought I'd post the solution here.

Ibus was installed on my computer using Kubuntu 19.10, but I still ran into the problem where Scrivener would produce the same character every time I tried typing an accent. I.e., if I first typed é, every accented character that I would subsequently try to type would come out as é.

Earlier today I decided to have another look at how my keyboard was configured. Using KDE, I opened the 'Input Method' window which, after clicking OK, allowed me to select the 'active intelligent input bus': 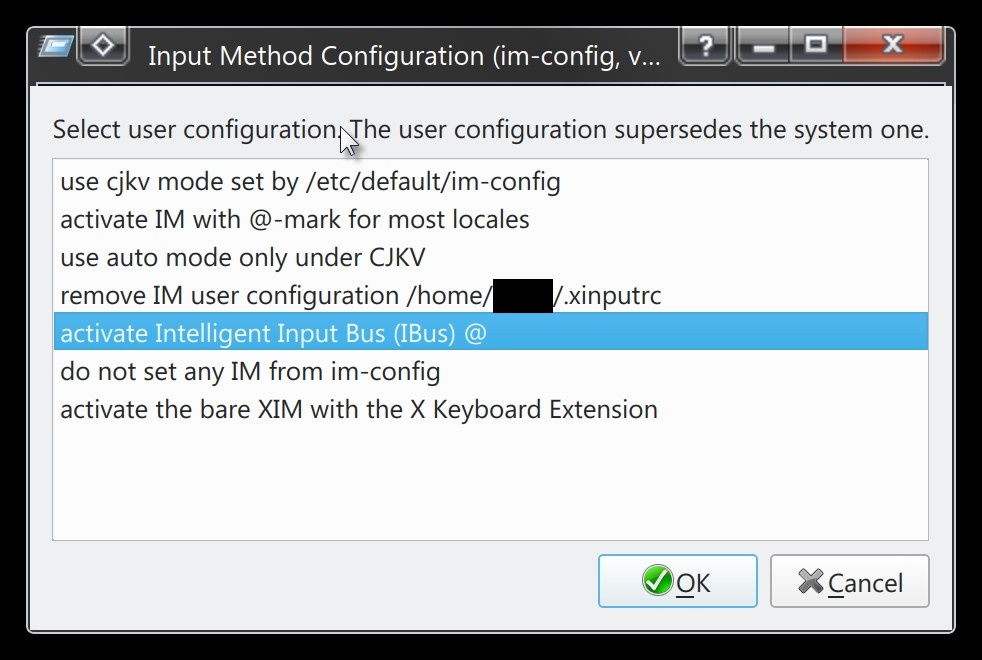 Apparently, 'ibus' had not been fully activated. Another OK, and a new 'ibus preferences' applet appeared in my system tray - and typing accented characters in Scrivener worked perfectly.

The solution Lambekin gave doesn't work for me,unfortunately, because I'm on archlinux, which doesn't have im-config. But the fact that it could still be an activate/setup problem had me digging again.

Question now is, why the difference between the launcher and the command line? Do they use different environment variables?

clombard wrote:Question now is, why the difference between the launcher and the command line? Do they use different environment variables?

Yes, typically they do not share the same set of environment variables. Many launchers do not invoke your shell environment and don't get the full setup of your environment variables, so you have to explicitly declare the appropriate ones.
--
Devin L. Ganger
Not a L&L employee; opinions are those of my cat
Life has a way of moving you past wants and hopes -- Kevin Flynn
Post Reply