Does a folder not included in compile count as chapter?

Subject sort of says it all. I have some folders with a single note that describe "off camera" events so the folders and their note(s) are not included in the compile. But they appear to be counted as a chapter when using <$n> in the folder's section layout. Color me puzzled.

THANKS for any advice!
John

jwnelson wrote:Subject sort of says it all. I have some folders with a single note that describe "off camera" events so the folders and their note(s) are not included in the compile. But they appear to be counted as a chapter when using <$n> in the folder's section layout.

I think the problem you're seeing is that, actually, Scrivener does not know about chapters. It does know about folders. You may give folders the "logical meaning" of chapters, but for Scrivener all folders are created equal, them being a "chapter" or "off camera" folders, particularly if they are at the same level.

You might try converting your "off camera" folders to files (with the right mouse button menu on the binder). This way they won't be considered alike by Scrivener at compile time.

The trick is to also mark your notes folders as excluded from compile. Here is an example where I’ve put three notes into one folder, note how all four items are excluded. I also have a free-standing note further down. Since it is all by itself, there is no need to use a folder here. Excluded notes have maximum freedom! You can do whatever you want with them since you aren't working toward some Formatting settings in the compiler. 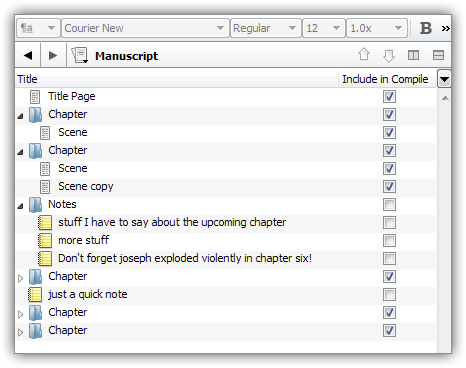 (If you’re wondering about the icons, those are in the beta version. A neat trick that I use is to make a “Note” class of document, using the document templates feature in the beta. Document templates are like an easier way to duplicate files where you want them, so everything about them is copied, including their custom icon—and the “Include” checkbox state.)
.:.
Ioa Petra'ka
“Whole sight, or all the rest is desolation.” —John Fowles

It had to happen.
.:.
Ioa Petra'ka
“Whole sight, or all the rest is desolation.” —John Fowles

Thanks, AmberV and MM! I think I figured it out using your advice. Getting started with a new crime mystery, I need to keep track of everything in the story that doesn't get compiled into the output file. In other words, all the behind the scenes actions of the opponent (or even allies). That's what raised this compile topic. I think I've got it now, thanks to you both.