I puzzled over the screenshots and I think the expectation is that align wouldn't actually align---but create a flowchart? Kind of like how in OmniGraffle, if you turn auto-layout on, you can quickly make flowcharts and diagrammes without having to manually place every node. Is that what you are describing? If so that is a completely different type of software, and that they can kind of look the same with a little fiddling is only a product of aesthetic efficiency. It's worth mentioning that even in these high-powered graphing programs, align still means to take all of the objects and flush their edges accordingly, exactly how Scapple does it.
.:.
Ioa Petra'ka
“Whole sight, or all the rest is desolation.” —John Fowles

I am new to forums but not new to Scrivener. I hope I am not violating any protocol by posting to this thread. I don't see an appropriate thread to contribute a comment.
I have used the Scapple program for a week now and love it. Like others on this forum, less is more for me so keeping it simple is a BIG plus for me.
I am a big fan of copy and paste so when I find good information out there I like to keep it a little closer than a link. I always copy the "source" for credit purposes if necessary but usually don't want the links that go with wiki articles. That is a long-winded way to say I want to copy plain text. Is that a feature you are considering? Right now I paste it to "Text Wrangler", remove line breaks, then cut and paste into Scapple.
Thank you for supplying the most effective, efficient and usable software on this planet!

My Scapple expired. Is there a link to the new beta version? Thanks

Parzival wrote:My Scapple expired. Is there a link to the new beta version? Thanks

LostInTheTrees wrote:The thing I would really like is multiple pages in a list that I can make hierarchical.

Next on my list would be to move the selected elements when I hit the arrow keys.

I'm not sure I know what you're describing for the first one, but based on the word "hierarchical" I'm going to guess that it's probably not something in the cards for Scapple, which is intentionally freeform and has no notion of ordering. There also isn't any plan for nested notes-within-notes via popovers or that sort of thing, though I'm not sure that's what you mean with "multiple pages". The second wish however is already granted: you can type `M` to toggle the Movement mode (or select it from the Edit menu), and the arrow keys will then work to move the selected notes. Hold the Shift key while pressing the arrow keys to move in larger increments.

Thanks for the information about the movement.

What I was describing is perhaps better described as "multiple canvases within one file". Recently switching from Windows to Mac I have been looking for something that can take the place of OneNote and have found nothing yet. Growly comes close, but is too annoying to use much, though I've tried. The author seems not very responsive.

I am happy with the simple canvas and the ability to make graphs and so on. But I need many canvases for what I am doing. Keeping track of them as individual files will be just too hard I think. In a file I would like to create a new canvas and give it a name. On the left I would like to see a list of the canvases. The hierarchy I spoke of is just the ability to create a mental hierarchy among the canvases by indenting some of the canvas names. Thus the Canvas name list can look like an outline or hierarchy. In actuality it only has to be an ordered list, with indentation. That's enough for me to create an outline of canvases, internally it's just an ordered list of canvases with indents associated with each name.

Growly does this. It's simple and easy to implement, but gives me what I need. You could implement an actual tree structure of canvases with expand/collapse of the list but I would not miss that (much).

BTW, your main customer base seems to be writers. I am a software developer and want to use this to plan and document the iOS app I am developing. Most of my View Controllers are complicated enough to require a full canvas to map out what it does. I use other canvases to map out the life cycle of objects and so on.

Sounds to me that what you really want is OmniGraffle (Pro), though that costs rather more than $10-15.

xiamenese wrote:Sounds to me that what you really want is OmniGraffle (Pro), though that costs rather more than $10-15.

Scapple seems so close to being just about perfect for what I want.

Just discovered today and I love it . because I can drop things as they comes, without thinking structure (first).

sometimes I was using Scriver like this, ie just like a pinboard coakboard, to classify my cards (notes) along a " thought" framework ( categories).

And I am doing it by changing a custom image background .(and using the freefom board)
Here is an example of what I mean:

(do you see the 4 quadrants and the categories ? (yellow arrows)

and here is the linear verison (not freeform), to compare :

this would be nice to have the capability to add a custom image in the background, isn it ?
(here I am using Toms Graves SCAN Framework)

It is worth noting that this might be easier to do with Scapple's own tools, rather than a static bitmap that forces you to work within a certain amount of space. A hint for drawing lines on the background is to make two empty notes (just tap the spacebar to keep Scapple from automatically removing it), and connect them together. So for single-space notes arranged in a Cartesian fashion like this would make your graph, which you could then label with small notes in the corners. If you need more space overall, you can just increase the size of the graph. The following is 100% created in Scapple: 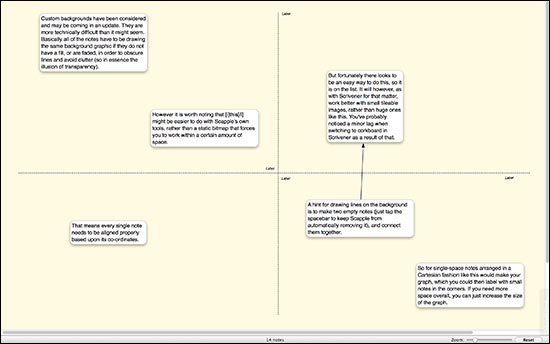 If you use this sort of thing a lot, you can save the empty graph, then select the Scapple document in finder and press Cmd-I to "Get Info". In the "General" section, set it to be a "Stationary pad". Now whenever you load this file, it will automatically spawn a new copy, rather than opening the original, making it act as a template.

Or, if you using one of Apple's newer operating systems, you'll find they have broken this particular feature of the operating system. You'll need to resort to remembering to use the "Duplicate" or "Save As" menu command after it has opened.

Thanks for your post, AmberV. Great idea to use space to build a line!
MnWolf

xiamenese wrote:Sounds to me that what you really want is OmniGraffle (Pro), though that costs rather more than $10-15.

Scapple seems so close to being just about perfect for what I want.

Sorry to take so long to respond. Actually, to me, OG is like Scrivener ... hugely complex and powerful if you need it, but can also be used simply and basically if you don't need the power.

And of course, just like Scapple, it was designed originally to replace the paper napkin as an environment for working out ideas. But yes, it is expensive, especially the Pro version — I've been using it so long it has paid for itself, I'm sure. On the other hand, it does do everything that you are asking, and yes, so much more.

By the way, I'm not related to the OmniGroup in any way, just been a very happy user of OmniGraffle, OmniOutliner ... and OmniWeb is still my browser of choice, even though it's had no development over the last three or four years ...

AmberV wrote:I puzzled over the screenshots and I think the expectation is that align wouldn't actually align---but create a flowchart? Kind of like how in OmniGraffle

Thanks for your reply. I am actually looking forward to use Scapple for mind mapping. I would use it prior to writing longish texts in Scrivener.

I am attaching an actual Scapple file, not a screenshot. Although it is short and simple, I have had no success when automatically aligning/distributing/autofitting in order to make visual sense of its info.

I will be grateful if somebody can make something out of it and let me know the steps it takes. Thanks.

Aligning and distributing are quite flexible and powerful but not automatic.

In fact, automatic layout is precisely what Scapple was designed to avoid.