I just saw this on the list of Nano 2011 sponsers:

Look at the screen shot: 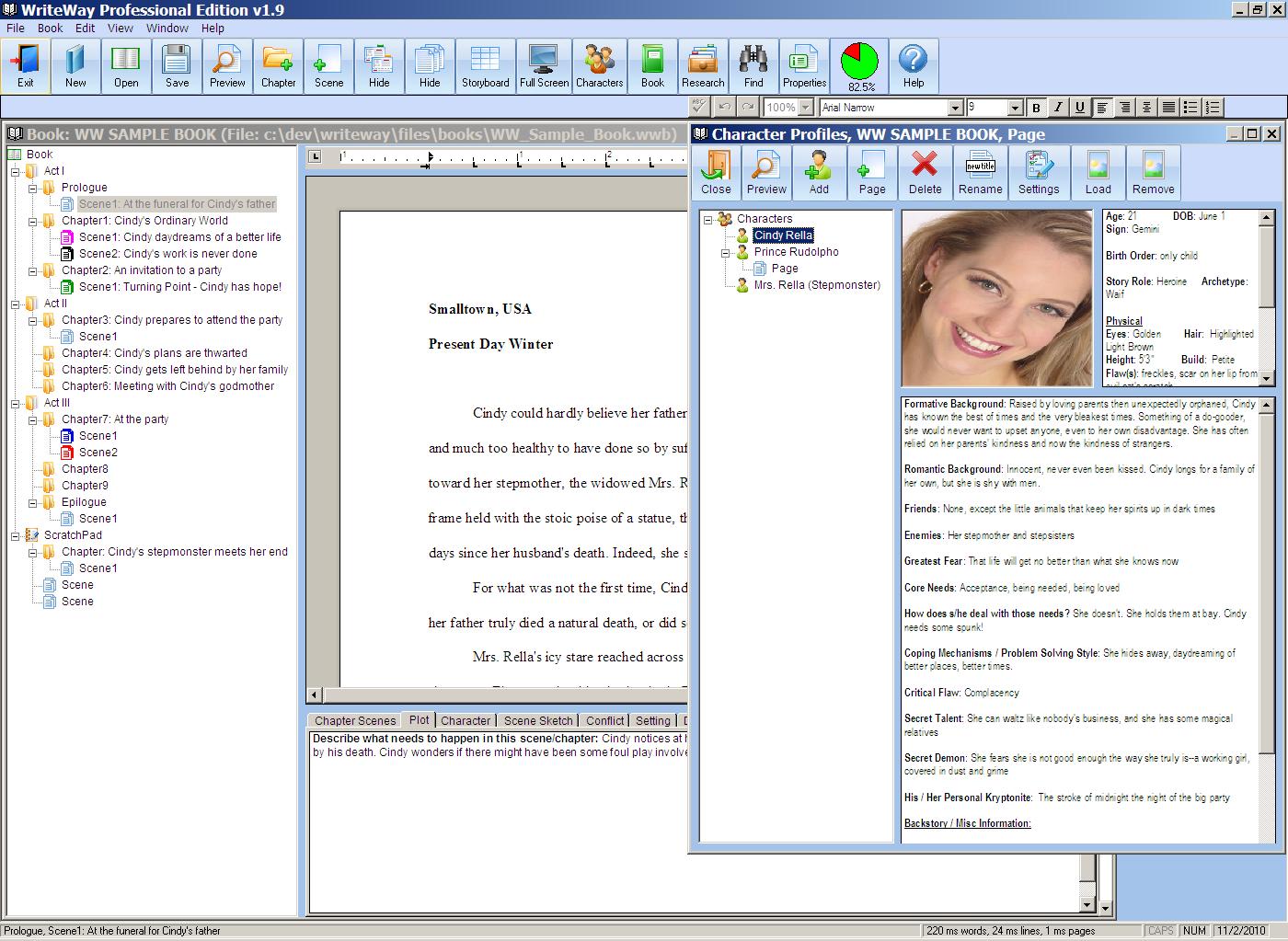 Totally a Scriv knockoff. Except for a few things:

Look like this particular piece of software predates Scrivener, so I don't think it would be a knockoff, just a program that works like Scrivener. There are reasons why Scrivener works as well as it does, and some folks on Windows have been finding ways to do that for quite a while. Now we just have a better choice for doing the same thing, and that's Scrivener.

WriteWay Pro has been going for years, in all fairness, and does indeed predate Scrivener by several years. It was one of the pieces of software I tried when I was back on Windows, looking for my perfect writing software, before I decided to write my own (by which time I'd moved to a Mac).

The original idea for Scrivener came from me wanting to combine Windows Explorer with Word (sort of) - have a navigation pane on the left that would allow me to switch between all my snippets without having to change programs and have multiple windows open (I also wanted a split view and some way of connecting synopses with each snippet, so that I didn't have to keep a separate Excel file of summaries of my Word docs...). Before writing Scriv, I tried out all the existing software, thinking that there must be something that did that already - nothing did; there was already a fair bit of writing software out there that had a navigation pane and text view, but none had the flexibility I wanted (it was a screenshot of NewNovelist in a magazine that really gave me the idea that it was possible to have navigation and editing in one program, and I was bitterly disappointed when I bought it and realised that you couldn't navigate at all, only fill in the twelve-step hero's journey of Christopher Vogler).

WriteWay Pro was one piece of software I evaluated on my quest - along with another, similar piece of software with "Write" in the name that I forget the name of (WriteItNow! That was it), but it forced you into working with Acts, Chapters and Scenes, and had a very rigid three-act structure, at the time, I believe. I didn't want that rigidness; I wanted complete freedom to structure everything exactly as I wanted. I don't know if that's changed in WriteWayPro since, or if there was always some way around it, but as I recall, that is the main thing that put me off. It seemed a decent enough piece of software on its own terms, though. (RoughDraft was probably my favourite of the bunch, which is sadly now defunct - the trouble with that, though, was that its navigation pane really was just a window on Windows Explorer, so your files were still all separate and you could only sort things alphabetically and suchlike, I think - I may be wrong as it's been a long time since I evaluated all of this software. That allowed you to switch between scriptwriting and normal text modes, too, long before Scriv came along.)

I do note, however, that there seem to be several pieces of writing software sponsoring NaNo this year, so we have more competition than usual! Still, while that might not be so great for us and our plans for world domination, it can only be a good thing that the participants have so many options.

Although I do see that one of the sponsors claims that their software eschews "tired" "caulk pinboard" metaphors - I have yet to see a pinboard made of a silicon sealant, so I don't know what's "tired" about that, I think that would be a rather exciting pinboard. Miaow!

All the best,
Keith

P.S. In fact, we even have a link to WriteWay Pro on our links page.
"You can't waltz in here, use my toaster, and start spouting universal truths without qualification."

Thanks for this thread.

I don't want to sound off like a Scrivener Homer because I am only now discovering it through the NaNo forums and I am evaluating the Windows Beta. When I saw that WriteWay was a sponsor this year I looked a little further and when I saw that it had been developed as Windows program from the beginning I decided to download the NaNo demo and run my own side by side comparison.
The download and installation went smoothly enough, but when it came time to launch I got a run time error message (I can't recall the exact one right now) and it would not launch. I did an uninstall and a reinstall and got the same run time error message.

I emailed the support group on the WriteWay site and then started searching for the error message and possible solutions (I even posted a query in the WriteWay thread of the NaNoWriMo sponsors forum, but deleted the post later when I realized that it could be something in my computer and not necessarily a problem in the WriteWay demo). To their credit, I received a response in about an hour. By then I had read about, and tried, a few potential solutions written to address the specific error message I had been getting but without success. I had also done a complete uninstall and made sure to remove all traces of Write Way from my registry as well.

In the end, the solution I got from WriteWay was credible and the directions for the fix were clear and simple enough to implement. The gist of it seems to be that WriteWay was written long enough ago for it not to "play as well" with Windows XP or Windows 7 without some specialized administrator recognition. As I said, simple enough. I responded positively to the email, thanking them for their quick response and decided that I would hold off on trying another install. I haven't had any problems with Scrivener after all, and I still have to start actually using it beyond the tutorial.

Again, I do not mean this as an indictment of WriteWay or even to say that my limited experience was entirely negative. Quite the contrary since, technically speaking, I have zero actual experience with the software and the response I got was both immediate and very helpful in both explaining the cause and offering a workable solution. I just saw this thread and thought that my very recent experience was relevant since WriteWay is offering their product to NaNo participants this year with pretty much the same incentives as Scrivener. I hope that they will make the necessary updates to their product for it to be entirely compatible with Windows 7 systems.

Competition is good thing but, for me anyway, it looks like Scrivener is way out front even with only having a Beta for Windows, albeit a very advanced beta.

Ha! I'ma get me some caulk down from the ge-rage!
Jennifer Hughes
(MM for short)

I too have evaluated, or at least played around with, a bunch of Windows-based writing software programs. I still have yWriter5, Write It Now, Liquid Story Binder, and Page Four on my hard drive, but I have never done more than poke ineffectually at any of them. Lot of fiddling, but no actual writing.

The one program I have used, and like a lot, is Super Note Card by Mindola. I got it because I really, really wanted an index-card program like the one my Mac-using pals had in . . . Scrivener.

Now I have Scrivener.

Super Note Card, for those of us who have not tired of the pinboard metaphor, is a terrific piece of software, very useful for planning, organizing, brainstorming, and the like. But since I am now writing in Scriv, it doesn't make sense to do the index-card planning in one program and then laboriously transfer it to another. Scrivener has everything I need, and now, with 035, it seems to be working just fine.

You betray your ignorance! Caulk is what all of the writers are using these days to cut scenes. Grout, too.
.:.
Ioa Petra'ka
“Whole sight, or all the rest is desolation.” —John Fowles

Excuse me! I use BLUE grout on a WHITE caulk-board!
Don't be ridiculous.

You win the internets.

YES!! dances around with fist in the air

Somehow, that reminds me of a story I once heard of someone who thought they had deleted the internet when they deleted their browser icon.

Just to add in an off-topic moment.
Post Reply