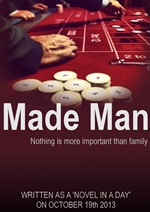 Pick up a copy of this year's NiaD book:

The Scrivener project used to create the final copy is also available, and it includes the chapter briefs that were provided to the authors on the day of the event:

On Saturday 19th October we will once again be working together to write a Novel In A Day. For anyone not familiar with the event, participants receive a briefing pack on what to write at midnight UK time on the day of the event and have until 8pm the same day to submit their chapter of at least 1,500 words. The individual sections are then compiled using the magic of Scrivener into epub, mobi and pdf files which will be made available for free download, along with the Scrivener project itself.

This is the third time we have run this event and it's proven to be a lot of fun for everyone involved (except pigfender) each time. You can read more about the event and pick up free copies of the previous years' books at novelinaday.com.

As with previous years, I'll keep an updated list here of everyone that has registered an interest.

START TIME
- in your corner of the world
- countdown

Oh and look at that, BBcode works.

To everyone who takes part, good luck.

<waves hand wildly> Me! Me! I wanna play again!

She clasped him in her manly arms. "Begorrah!" cried the evil hook-nosed rabbi. He reached for his gun. In the distance a snake barked. With a thunderous roar the mighty jets roared thunderously into reverse thrust, then into forward thrust again, then into reverse thrust, then into forward thrust. "No!" cried the Pope, adjusting his mighty electroscope™. But it was too late. With one tug the false beard came away and I recognised the face of Holmes. Tears started in her luminous blue eyes. "Great Scott, wing commander," murmured Raffles. The deck pitched in the remorseless pounding waves. Eriksson's teeth were clenched, the veins standing out on his huge forearms. "M'look, m'bwana," murmured Surgeon-Lieutenant Ibrahim al-Saqr, "It's the m'Zulus, thousands of the m'blighters, rushing down the hill!" The girl swayed her hips entrancingly. "You can't go wrong with the charcoal pinstripe," said Q. "Conventional, but stylish." Bond smiled enigmatically and undid his trousers. The balloon was out of control now, ascending rapidly. The huge tarpon plunged under the hull, the reel screaming as the line stripped out. Molten lava poured down the mountainside. The Damascene blade of his Higonokami was a blur. Ian Duncan Smith's intestines spilled onto the velvet couch. The courtesans screamed and threw up on his head. "Gutted by God!" cried Gove, but it was too late. His wet lips writhed then fell onto the floor. The bank manager peered over his half-moon dentures. "It's not a request," he murmured; "It's an order." "Gosh, Letitia" said Dr Greenhalgh, "without my glasses, you're beautiful."

260 words down and not even in receipt of his chapter packet yet!

Hi
Please can you include me again, have so loved doing these :)
thank you

Is it really that time of year again? Novel-in-a-Day was great fun last time, and much less scary than I thought it would be. Definitely count me in, please.


And yes, she gave permission.

Already? Count me in.

Hi Pigfender. much as i'd love to be in again, i think i'm going to have to cede my place to someone else. my left hand is out of action in strapping and a splint for the next month at least, and i don't relish trying to type 1500+ words, pecking with one hand -- i'm not a pigeon!

But i'll greatly look forward to reading the result.

Sorry to hear that, Mr X. Hope it's not giving you too much discomfort.

Thanks to everyone that's signed up. Already up to 8!
Thanks also to Mrs Nom for the generous loan of her husband.

One of the things I'm doing this year to reduce some of the stress is I'm going to let the story dictate the number of participants, rather than write the story to meet the final numbers. I'll work out the exact number over the next fortnight, but I expect we will be switching to 'reserve places' after 25 people.

siren wrote:much less scary than I thought it would be

I don't know what you did to fix it, but thanks! Taking full advantage!
:D

I shall be there with all manner of jangly things on.
Post Reply