I really like the Scapple color picker, but I am puzzled by the somewhat random selection of colours (5) above and (31 with 5 blanks) below the main matrix. It seems as though it ought to be possible to change these, as one can change the swatches t the foot of the system color picker, but if there is I have not found it.

The row at the top is just a few colours we picked that seemed like good defaults (sorry if they seem random, we actually deliberated over these!), there is no way to change them or anything like that. Your custom options are the row along the bottom, which as you note, pulls from the first dozen custom swatches in the system palette.
.:.
Ioa Petra'ka
“Whole sight, or all the rest is desolation.” —John Fowles

Thank you very much for the super-speedy reply.
I am sorry if I appeared to disparage your choice of default colours—they are *very nice* colours, they just had a slightly random feel to me, that suggested the possibility of customisation.

As for the bottom ones, I am intrigued. You say that they are "pulls from the first dozen custom swatches in the system palette". Now that I look closely I see that indeed the swatches do correspond to the colours in my system palette, but in an oddly random order. For instance if I add three yellow swatches to the system palette and then reopen the Scapple color picker, three of the unused swatch cells have been used up, but the new yellows are irregularly spaced along the top row. Is there any sort of logic to this? It is often much easier to select a colour if you can recognise it in a deliberate context.

To revert to the top row of five swatches: these are clearly the most readily accessible in pole position at the head of the grid, so should be (and are intended to be) the most often used. However carefully selected they were, colour above all things is very subjective, and I feel there is a good case for making them user-definable.

Weird, I’m not seeing that myself. I added three variants of yellow to the end of my list, and here is the result: 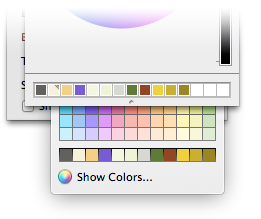 Perhaps try restarting Scapple. On 10.9 I had to anyway because the newly added swatches were not registered by the picker until doing so.
.:.
Ioa Petra'ka
“Whole sight, or all the rest is desolation.” —John Fowles

Thanks again Amber. The swatches remain out of sync on my Mac, but only when running Scapple in OS 10.6.8. With 10.8 it behaves as it should. No way of knowing whether this is a general thing on Snow Leopard, a conflict with something else ~I have running, or just me. Not to worry, I hope to upgrade quite soon.

Any hope for customisable top swatches?

Interesting, it does seem to be working fine in 10.8 for me as well. I'll make a note to see if there is anything that can be done for 10.6.

And yes, I have the top row bit on the list for consideration.
.:.
Ioa Petra'ka
“Whole sight, or all the rest is desolation.” —John Fowles
Post Reply
Page 1 of 1