A Scrivener only no distractions laptop

Just wondering what the minimum hardware requirements are for Scrivener (any OS version).

I think it would be nice to use an old laptop with no internet or anything else just for writing, no?

Alternatively... I wonder if there's a text mode Scrivener-like program out there somewhere that was used years ago... something for emacs for example. My brother is giving me an old 800mhz laptop with only 128mb of RAM... I guess that's not enough... hmm...

You might want to look at Puppy Linux: http://puppylinux.org. I've just started doing so for something unrelated to Scrivener, so I can at least say that it seems to work just fine. I installed it on a flash drive. One of Puppy's strengths is its ability to run well in constrained hardware environments.

I don't know what peripherals you have on the old laptop, but Puppy can also run completely on a CD or flash drive. Actually it runs in ram after reading from the storage device, but I think it uses less than 128MB.

The issue may be whether Scrivener itself is too large to run in only 128MB. Good luck.

Another issue is make sure you save any web pages as images or text, since you won't have access to them saved as html in a scrivener project without the network.

Oddly enough, when I was working on the dissertation, going to a local coffee place helped my distraction level. Maybe that's an option?

RAM, though, is cheap. Any chance you can up the RAM in that laptop? It'll run better.
Slackware-current 64-bit, XFCE

cheers. Thanks for the coffee shop tip! I'll try that out!

Upgrading ram can sometimes cost a bit... Will see.
Until i get the old laptop i will run the .deb and do a $top to see how much ram scrivener takes

I have a gut feeling windows98 or one of those ultra cut down xp remixes might have a lower footprint than puppy...
Framebuffer instead of X might help too...

If you really want to squeeze some more cpu and memory out of it, use a window manager like xfce. You won't get all the bells and whistles of KDE or gnome.
Slackware-current 64-bit, XFCE

As to X Windows vs. frame buffer, I wonder if Scrivener will run without X. I have no idea. I think QT has a non-X widget set, but I don't know the details. Interesting to consider. I've used an FB-based Linux before (Gentoo without X, in my case). It wasn't bad. Switching terminals with the function keys worked well. I supposed running an FB-based Scrivener on one of those terminals would work. I just don't know if it's possible to run Scrivener that way. L&L care to comment? AmberV?

Puppy has more than one low-memory window manager to choose from. And a tool to make the selection easy. No Gnome or KDE in sight. I think the default is JWM/OpenBox, but I'm not sure. RAM is not a concern on my desktop machine so I haven't checked.

There are also many different versions of Puppy, the two I'm most familiar with being Lucid Puppy (compatible with Ubuntu packages and the version I chose to run) and a Slackware-based Puppy called Slacko Puppy.

I would be surprised if Windows 98 or XP have a lower memory footprint, but I have no experience with memory-reducing Windows environments. Good luck, whatever you choose.

I haven't used framebuffer much, but just dorking around with videos, it was pretty buggy. I'm not sure something like Scrivener would totally work without X.

There's also this one: http://www.damnsmalllinux.org/ I've used it before when stuck on windows boxes. I don't know if it's been updated recently, though.

There are other distros that have been updated more recently, it looks like: http://distrowatch.com/search.php?ostyp ... tus=Active
Slackware-current 64-bit, XFCE

Take it back...I'm pretty sure that's the one I used. It was awhile ago.

It's recommended configuration is 128MB RAM, but will run with 46.

This brings back memories. My first ever Linux box I bought from my (now) fiancé for $25 and a loaf of homemade challah. The thing didn't have enough RAM to run X, so I learned linux via the command line. My next computer was a box from Boeing Surplus. It was a PII and was so incredibly fast, compared to the Frankenstein computer I was using. My fiancé tossed my first linux computer during a move. Good times. That was back when distros came on something like 16 floppies, and woe betide you, if one was corrupt.
Slackware-current 64-bit, XFCE

Since we are comparing starts.

Thanks, garpu. After using it for a while, I'm not altogether happy with Puppy. It takes longer than I would like to boot, so I may give Tiny Core a try.

And this thread is making me curious about having a flash-based Linux that runs Scrivener with a backing store on the cloud. Or perhaps I'll go down to the local second-hand computer store and buy a who-would-every-want-something-this-old laptop and use that.

Hi everyone. I have a Toshiba Satellite 4030CDT laptop with 192Mbytes of memory and I'm currently trying to discover whether I can use it to run Scrivener for Linux.

The question I was going to ask in this forum was "Which distro is compatible with Scrivener?". But after reading this...

jravan wrote:The issue may be whether Scrivener itself is too large to run in only 128MB. Good luck.

...perhaps I should be asking "Which distro will co-exist with Scrivener in 192 megs of ram?".

Would you say that's correct? Are memory limitations going to be more of an obstacle than finding a suitable distro?

[EDIT: I forgot to mention that I've run Puppy Linux 4.1.2 Retro from a live CD on this Tosh, and the bar at the bottom of the desktop reported that 91 Mbytes of memory were unused.]

Since my last post, I've burned some distros to CD-Rom and booted the Tosh with them. My goal was to see just how much memory each distro occupied once it was up and running. I thought I'd post the numbers here in case anybody else is trying to revive an ancient laptop as a Scrivener machine--but I'm not sure how reliable these figures are...

On the bar at the bottom of the desktop, Puppy Linux declares "91M Free". This would imply that about 100MB is being used. And yet, the "Summary" section of the System Profiler says "Memory: 190MB (62MB used)".

I haven't tried Tiny Core Linux yet. In the next couple of days, I'll download that & give it a try.

Jaysen wrote:Since we are comparing starts.

It's not Linux, but...
First PC: an Amstrad PC1512 with 512k memory, a 20MB hard drive and a CGA graphics card*
First OS: MS-DOS, dual booted with Digital Research's GEM

It was my dad's office machine, but I replaced the GEM system with an DOS text-based menu system written into to the autoexec.bat file.

* - CGA allowed you to display four colours at the same time! Two of which were white and black (the others were either purple & cyan or yellow & green - the program could choose).
http://www.pigfender.com | http://www.novelinaday.com
"Some dice only have sixes." nom, 19 Oct 2013

I've recently finished the book I was working on, so I've been able to give some time to getting Linux running on my old Tosh laptop.

Realising that 192 megs isn't much to work with, I first tried running the most modest distros I could find. The "Damn Small Linux" live CD installer would hang almost every time I tried to boot from it. Ubuntu 6.06 booted every time, but gave me an 800x600 resolution desktop on a 1024x768 screen. Puppy Linux also booted every time and gave me a desktop that filled the screen.

However, as I've been learning more about Linux, I've realised that Scrivener's ".deb" download file means that I should be looking for a Debian-based Linux. So I limited myself to members of the Debian family...

The Slitaz 4.0 and 3.0 "LoRam" live CDs weren't even recognised as boot disks -- the Tosh would sniff them and then boot from HDD. Antix 13.2 would start the boot process, but then hang halfway through. Same with Bodhi Linux 2.4.0.

Lubuntu 10.04 was very good. Like Ubuntu 6.06, it booted successfully, but gave me a desktop measuring 800x600. So I installed it onto the machine, in the hope that I could alter some config files once they were on the HDD. I tried the fixes that were described in the online forums, but they didn't work. The most promising solution was to use a command called "displayconfig-gtk", but neither Lubuntu 10.04 nor Ubuntu 6.06 recognised it. It appears that this command was included in Ubuntu distros after 7.04, but deprecated by about 8.10.

So with high hopes, I downloaded the Xubuntu 7.10 disk image and burned it to CD. But I think there might be a problem with the desktop... 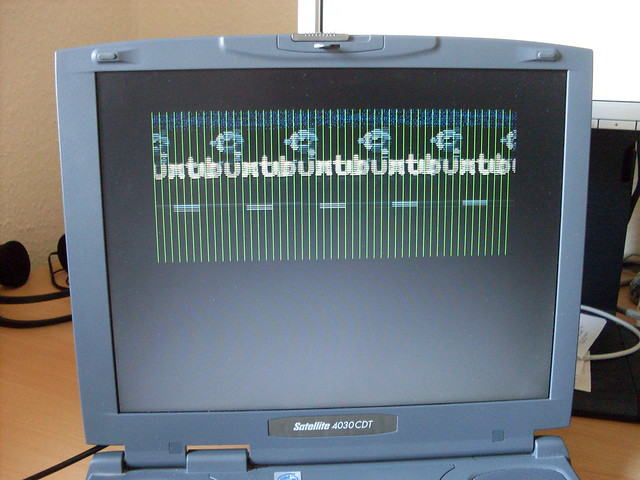 I've tried booting in safe graphics mode and I've also tried adding "nomodeset" to the boot parameters, but it hasn't made any difference. I still get a scrambled splash screen (in a very fetching purple) and the "desktop" you see above.

Maybe it's the universe's way of telling me to re-install Win98...
Post Reply