Scrivener for iOS: It's Time to Talk

This month is something of an anniversary for us: it was ten years ago that we launched the Literature & Latte website and forums, after a few months of beta-testing on a temporary Proboard forum. I say “we” - back then it was just me. I was beavering away on Scrivener for Mac, wondering if anyone else would find the writing tool I'd always wanted useful. I never for a moment expected so many would.

Looking for another iOS developer

We’re looking for another iOS coder to help speed things along with getting our iOS app finished. Full details can be found here:

We have a lot of people asking after the iOS version given that I haven't posted much about it on here recently (although I have been giving incremental updates over on the forums). The lack of updates isn't intended as a slight against our very valued users; it's just because we've had our heads buried in code and haven't been coming up much for air. 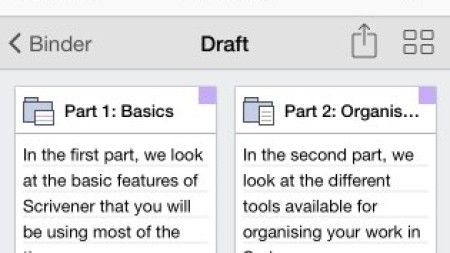 The Vapour Trail of Scrivener for iOS

We’re over halfway through 2014, so I wanted to give our users a quick update on the progress of the iOS version of Scrivener. We receive emails and forum posts daily asking how it is coming along, and because of how long it seems to have been in development, we've even had users assume that it has been abandoned (we've even been accused of lying about it being developed at all, but I promise that’s not the case, even if we have continually underestimated the time involved).